The new Gedling Country Park, on the outskirts of Lambley and Gedling village, has come under heavy criticism for inadequate facilities. 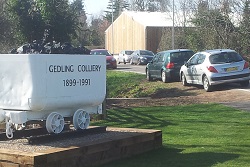 Officially opened on Saturday 28 March 2015, with an estimated 2000 people in attendance, the park’s popularity has been the cause of many problems.

Chief among these has been the capacity of the car parks. The Spring Lane car park has a capacity of just 40 cars, and has been full to overflowing on several occasions since the opening. A further 50 car parking places are available at Lambley Lane, and these have also been fully occupied.

The Spring Lane car park appears to be more popular as it provides easy access to the best views.

Problems began the day after the opening, when ‘human error’ led to the Spring Lane gates remaining locked all day. Our enquiries to Gedling Borough Council elicited no response, but dumbles.co.uk was told by a representative of the Friends of Gedling Country Park that this was a teething problem and would not be allowed to recur.

Even with the gates open, the inadequate capacity of the car park has led to many vehicles being parked along Spring Lane. The problems were particularly clear during the Easter weekend, as fine weather brought many people to see the new park.

Many residents have expressed concern that the roadside parking on Spring Lane presents a substantial risk of accidents.

Responding to a barrage of criticism on Facebook and Twitter, Gedling Borough Council has issued a statement:

“We’ve got long-term plans for more parking off Arnold Lane but we need to wait until after the Gedling Access Road is built otherwise we’ll end up having to re-do this car park which would be a waste of money. We’re looking at options to provide some additional parking in the near future – to cope with demand at weekends and bank holidays in particular – but in the meantime, we’d ask people parking on Spring Lane to be mindful of other road users and considerate towards local residents.”

Other criticisms from visitors have included the absence of the expected visitor centre and inadequate provision of bins. 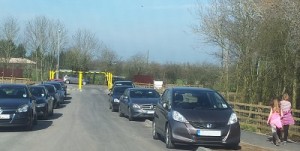 Gates finally opened, but not enough parking spaces inside