Those silly buggers from the Calverton Real Ale and Plough Play Preservation Society (Crappps) will be interfering with drinkers at various local pubs this Saturday, 25 April 2015, in order to perform their St George’s play. 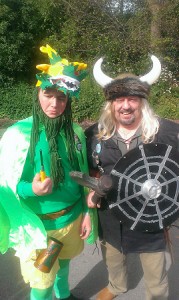 A dragon and, erm, a Viking. Or maybe spiderman

The troupe will be in pubs in Lambley, Woodborough, and Calverton from about 3pm, and will also perform their show at Blidworth on St George’s Day itself (Thursday 23 April).

This is the fifth annual outing of the Crappps players on the official day of England’s patron saint, which they describe as a milestone.

The full schedule is reproduced below, but please note that all timings are approximate.

The group is best known for its annual Plough Plays, performed since 1979 and upholding the ancient Nottinghamshire tradition of mummer’s plays. These have raised over £20,000 for the NSPCC in the process.